In the first part of this program we investigate whether freezing serves a passive or rather active preparatory state. Freezing has been previously shown to serve a passive state of attentive immobility in which detection by predators is minimized. It is also viewed to serve action preparation, but empirical evidence reflecting freezing as active coping style was lacking. We developed a shooting task (figure 1) in which participants either could prepare an active shooting action or were unarmed and therefore helpless against a potential upcoming attack. With psychophysiological measures as postural sway (figure 3) and heart rate responses (figure 4), we assessed freezing responses during a variable anticipation interval. The ability to prepare for action resulted in decreases in heart rate and postural sway indicative of freezing whereas this was not the case in helpless conditions. Threat of shock potentiated heart rate decreases even further. This indicates that freezing is related to active action preparation under threat (Thomas Gladwin, Mahur Hashemi, Vanessa van Ast).

The second part of this program aims to understand how we neurally shift from (parasympathetic) freezing to (sympathetic) fight actions. Threatful situations sometimes necessitate immediate actions and therefore require flexible switching between hardwired freeze and fight-flight actions. We used a modified version of the shooting task under threat of shock in combination with autonomic measures and blood-oxygenated-level dependent functional magnetic resonance imaging (BOLD-fMRI). By this we were able to dissociate two psychophysiological states:  First, parasympathetically-dominated freezing was reflected by heart rate decreases and activity in the periaqueductal gray (PAG). Second,  the  switch  from  freezing  to sympathetically-dominated shooting action (fight) was related to  specific  activity  in  the  perigenual  anterior cingulate  cortex  (pgACC)  and  pgACC-amygdala  connectivity.  (Mahur M. Hashemi, Thomas Gladwin, Floris Klumpers). 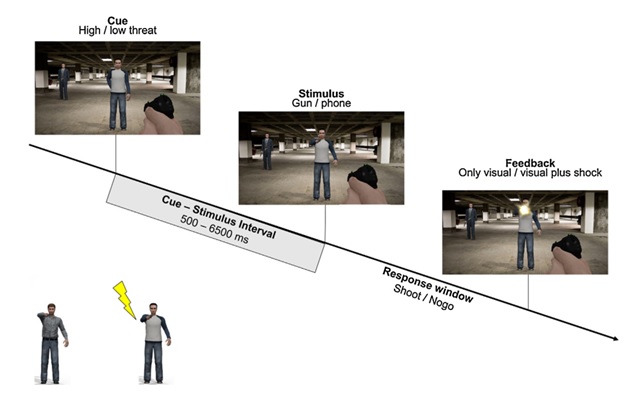 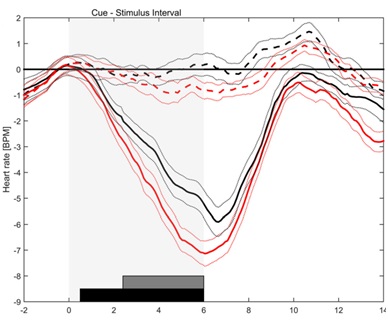 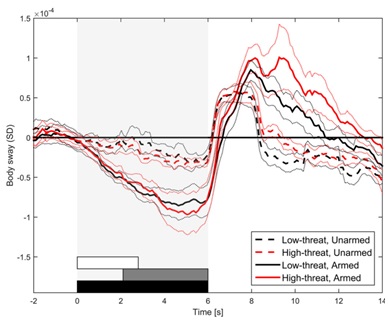