The ability to control our automatic action tendencies is essential for almost every human interaction. However, control over our automatic tendencies is often compromised in challenging in situations when people fall back on automatic ‘freeze-fight-flight’ (FFF) responses. Stress-induced lack of control over FFF-tendencies constitutes a problem endemic to high-risk professions (e.g. the police) leading to poor performance and increased risk for posttraumatic stress disorder (PTSD). Subsyndromal PTSD-symptoms are prevalent among police officers and automatic FFF-behaviors are suggested to form the major maintaining factor. However, most research has predominantly focused on the cognitive aspects of this disorder and has largely neglected automatic FFF-behaviors.

The present longitudinal NWO-VICI funded project encompasses a close collaboration between the Radboud University Nijmegen and the National Police Academy to test the role of automatic FFF tendencies in the development of stress symptoms in Dutch police recruits. The study consists of two waves of data assessment (Figure 1). The first assessment wave (wave 1; pre-exposure) takes place before police recruits make the transition from the relatively safe environment of theoretical training to their first services in the emergency aid. The second assessment wave (wave 2; post-exposure) takes place after the police recruits have been exposed to the relative stressful services in the emergency aid. After completion of data collection we will be able to prospectively predict trauma-related changes in phenotypic PTSD symptoms, on the basis of pre-existing FFF markers (i.e. behavioral, psychophysiological, neuroendocrinological and neuralmeasures) assessed at wave 1. In addition, we will test whether changes in FFF markers from wave 1 to wave 2 relate to PTSD-symptomatology after exposure to aversive events during the emergency aid. See http://freezeonderzoek.nl/ for more information about the Police-in-Action study. 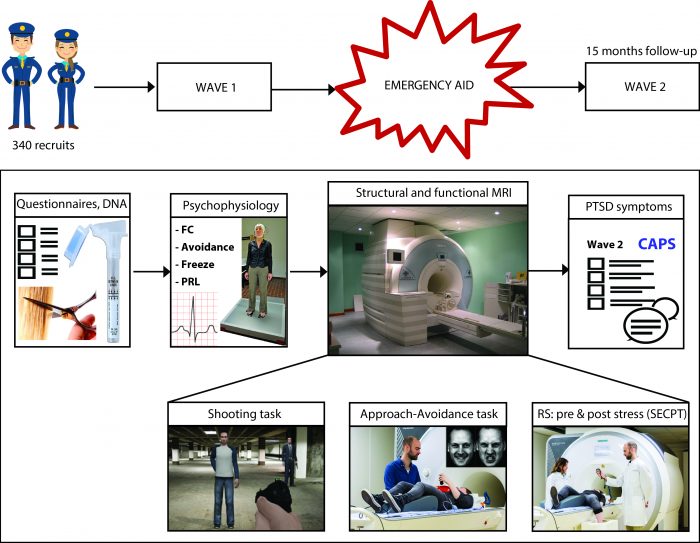